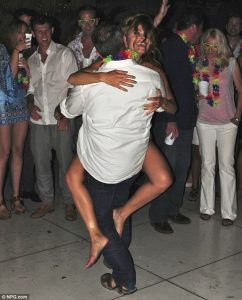 Maria Menounos became 34 and threw a birthday party at her Encino home, California on Saturday. Many VIPs were invited to the party but Mel Gibson was not supposed to be on the list, so what a surprise when he crashed the party.  According to TMZ, someone working with the Greek-American TV hostess brought Gibson to the party.

All guests were given a fresh flower lei at the front door, as the party had a Hawaiian theme. Maria Menounos was photographed with several exotic animals such as a monkey, a snake and a grey parrot. Donald Trump was also among the guests, but no one may have enjoyed the party more than the 56-year-old action star!

When Mel arrived at the party, he walked to the centre of the room to dance with the guest of honor. He grabbed Maria and swept her off her feet and danced some Hawaiian songs. Menounos wrapped her legs and arms around him for balance and the photographer took this wonderful picture.

And as expected, party goers cheered when they saw the film star swirling the birthday girl around.