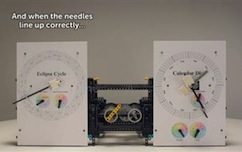 The Antikythera mechanism is regarded to be humanity’s oldest computer. It dates back to the early 1st century BC and is designed so that ancient Greek astronomers were able to calculate astronomical positions.
Local divers discovered it in a shipwreck near the island of Antikythera in 1900. Scientists realized it was a kind of ancient computer, but they could not understand how it worked at first, since it was comprised of many gears. When they managed to do so, academics abroad expressed their admiration on the ancient mechanism and its detailed construction.
So, is it easy for someone to copy this ancient computer? Obviously, not at all! But people of Lego company did it with great success, they made its clone and here it is:
[youtube]ACzmGRwS7as[/youtube]