GRNews
GreekReporter.comEuropeIvan Savvidis to Give 1M Euros to Russian and Greek Football Teams 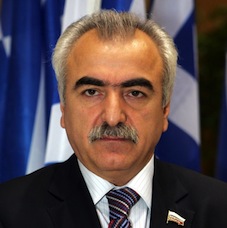 Greek Russians decided to provide the national football teams of Greece or Russia with one million euros in case they manage to reach the final rounds of the Euro Football Championship 2012.

That is what the President of the Federation of Greek Communities of Russia and leader of the 5th periphery of the SAE-World Council of Hellenes Abroad, announced who organized and took part in a journey of Greek-Russian fans to Poland where the Euro 2012 is taking place.

Greeks of Russia were in the football field watching their beloved team at the premiere of their games and will keep supporting the team to the finals, told the Athenian News Agency. Mr Savvidis, who is interested in Greek football developments, especially in the PAOK team which he recently loaned a sum of 1.8 million euros without interest.

“And if the ideal happens and both Greece and Russia meet in the finals and play against each other, then the prize will be double, as each team will receive 1 million,” added Ivan Savvidis and called on businessmen of the two countries not to forget their national teams which stand as  “the athletic figures of their home countries.”