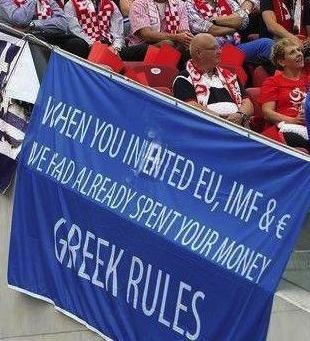 As it appears, Greeks never lose their sense of humor. Despite the austerity measures, the wages cuts, the recurring elections and the threats to exit the Eurozone, Greeks’ passion, football of course, brings the smile back to their faces.
Supporters of the Greek football team followed Greek players to Poland to watch the game against the country’s national team. The European Football Championship attracts many viewers all over the world, and so Greeks chose to demonstrate against the unfair foreign policy posed to Greece in a funny way, by showing up at the game.
Sprawled across a big blue banner, this statement: “When you invented EU, IMF & €, we had already spent your money-GREEKS RULE!” As expected this witty, sarcastic picture went viral to make Greeks everywhere  every Greek feel a little prouder, justifiably or not.
The slogan is a paraphrase of the popular slogan, “When we made Parthenons, they lived in trees and ate acorns.” Perhaps an exaggeration, but at least, it is a fair retort to all the derogatory statements made by European leaders and economists during this time.

A European arrest warrant was issued on Tuesday for Christos Pappas, the neo-Nazi former lawmaker, who is on the run after his conviction in October 2020.
Culture