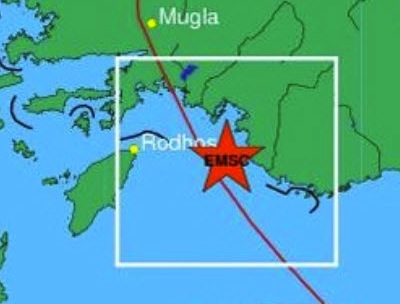 A powerful earthquake has rocked the Greek island of Rhodes and southwestern Turkey today, but no deaths or damage have been reported.
The Athens Geodynamic Institute said, the quake with a preliminary magnitude of 5.8, struck at a depth 23 miles in the Aegean Sea at 3:44 p.m. (1244 GMT) Sunday between Rhodes and Turkey.  The centre of the quake was approximately 40 miles from the city of Rhodes. Aftershocks were felt in the Turkish resorts of Oludeniz, Izmir and Antalya on the Aegean coast.  Police in Rhodes reported that there were no reports of injuries or damage.
No serious casualties were reported in Turkey either, but state TV said some people hurt themselves while panicking in reaction to the shocks.
These regions of Greece and Turkey are in seismically active areas and suffer from frequent earthquakes. A powerful earthquake last hit Rhodes four years ago, killing two.