Epiros Association of Guetersloh in Germany Celebrates its 20th Anniversary 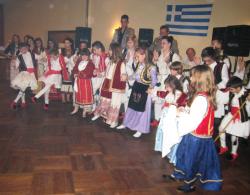 The Epiros Association of Guetersloh in Germany celebrated its 20th anniversary with an event attended by distinguished members of the association. As expected, President of the Pan-Epiros Federation of Europe, Mr Spyros Kostadimas, was also there to celebrate with his fellow countrymen.

The festival kicked off with a history lesson by President of the Epiros Association of Guetersloh, Mr Athanassios Vlachos, who chronicled the association’s 20-year-long efforts as well as its contributions to the Epirotes of Guetersloh.

Mr Kostadimas made special reference to the importance of  having national associations abroad maintain the traditions, culture and local customs. The President of the Pan-epiros Federation also stressed the fact that the Greek institutions of Guetersloh have been cooperating over the past several years amiably.

He continued by saying that the Federation has posed some short-term goals, including the programme run by the University of Ioannina for teaching young Epirotes from all over the world the Greek language. Last but not least, he referred to the 100th celebration of independence of the city of Ioannina- as well as of Preveza- and insisted that young attendants take a more active role in the administrative councils of the Epiros associations more actively.