Open Marrickville Has Got the Greek Blues 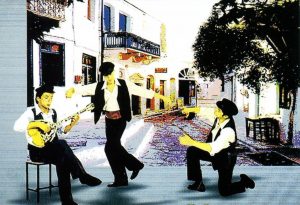 Forget the tango, flamenco and fado, rebetika is the true blues music of passion. Its melodies have been known to make grown men weep. Included as part of the Open Marrickville program and with the support of Marrickville Council, the Greek Festival of Sydney will be presenting an evening of Rebetika.

Step back in time to the Rebetiko era that developed around ports and urban centres of Greece at the end of the 19th and up to the first half of the 20th century. Experience the age of Rebetika through live music and dancing that tell a story of the struggles of displacement.

Rebetika, once reviled, is now revived and is a favourite among audiences all over the world. Songs of a refugee subculture, born in an urban underbelly, tell of  life and the age old struggle of the popular masses with poverty, love, social injustice, the clashes of the labor class and the freedom of Greeks from fascism of all faces.

That subculture still rings true decades later as John Anastasiadis and his band resurrect rebetika songs from its origins all the way through to the latter day rebetika of Tsitsanis and Vamvakaris. Anastasiadis whose main repertoire is rebetika began his music career in the 1970’s and was the owner of Sydney Rebetadiko (Greek Blues venue) Red  Martins. Accompanied by dancing performed by the Greek Orthodox Community of NSW dance group, Rebetika is a show that should not be missed.

“This is the music that pulls people together” Nia Kateris, Chair of the Greek Festival said, “The common link through generations and cultures and a bridge to the homeland”.