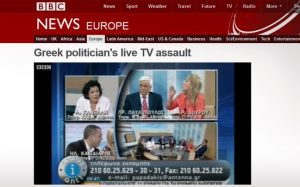 Golden Dawn party spokesman Ilias Kasidiaris featured all headlines of international media reports today after his assault against two rival female politicians during a morning TV show. The incident was played by all local media and could not be exempted from the daily news of major news agencies around the world.
More particularly, the Associated Press referred to the extremist party member’s assault against Communist Party representative Liana Kanelli after pouring a glass of water on SYRIZA party representative Rena Dourou.
French “Le Monde” wrote about the Neo-Nazi MP candidate attacking two female leftist candidates and made an extensive report on the rise of the far-rightist party in the past general elections in Greece.
German newspaper “Die Welt” also reported on the live assault and noted that the far-right party categorically rejects the ‘neo-Nazi’ label despite the accusations that want it organizing physical assaults against immigrants.
The violent incident ranked first in the most popular news of the British network BBC, which referred to the arrest warrant issued against the spokesman of Golden Dawn and the wild fight that burst out after Kasidiaris engaged in a heated debate with Dourou.
AFP, Huffington Post, Global Post, the Guardian, Sacramento Bee daily, Scotsman news, uswebdaily.com, vancouverdesi.com, Digital Journal and many more international news agencies featured brief or extensive reports on the ugly event which occurred a week before the 17th June elections.