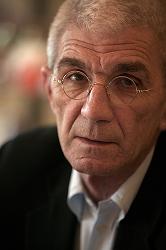 George Hatzimarkakis, a German member of the European Parliament of Greek origin, proposed Boutaris as the next Prime Minister. As he said, most voters who will vote for New Democracy are not thrilled with Samaras, and given the fact ND will not be able to form a government alone, the best thing would be a government with PASOK and an acceptable figure like Boutaris. Hatzimarkakis’ comment was made in a meeting with Greek and German journalists under an initiative of the European Parliament to bring journalists from the two countries closer.

Boutaris is a successful wine producer who entered politics a few years ago with a number of political initiatives. In 2006, he ran unsuccessfully as Mayor of Thessaloniki under the newly formed Drasi, a party mainly founded by businessmen. In the 2010 local elections, he was elected as Mayor with the support of PASOK, Dimar, Drasi and Dora Bakoyiannis. Along with many other projects, he has proposed to host a Gay Pride Festival, create a Monument for Jews who were lost in the 1940s due to Nazi occupation and to erect a statue of Kemal Ataturk, who was born in Thessaloniki.

Hatzimarkakis also pointed out that Germany has won over 70 billion euros due to the economic crisis in the Euro zone. His party, the Liberal and Democrats Party, is the partner of Chancellor Angela Merkel’s CDU/CSU in government. He also said that even if Syriza gets elected, there is no way Greece will leave the Euro. China and Barack Obama made it very clear to the Chancellor that they will not accept a Greek exit from the Euro zone, he underlined.
(Source: tvxs.gr)