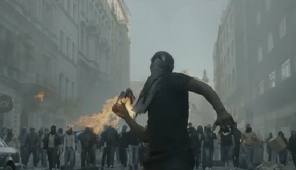 Romain Gavras, son of director Costa Gavras, is a Greek-French filmmaker not so beloved by French officials. The 31-year-old director makes both long and short films, as well as videos, showing the violent “battles” taking place in downtown Paris between protesters and policemen.

Romain commented some time ago that “French hate me more than they hate a pedophile.” His provocative film “Our Day Will Come,” released in 2010, shows the hatred and racism that French people have towards an underage red-haired boy. Before this, Gavras had already shot several similar short films and videos.

In 2007, the Greek-French director filmed the “Stress” video for Justice, where he showed activities undertaken by real street gangs and extreme violence, with which French police react to such groups.

The latest work of Romain Gavras could not escape this common subject of his, not even following negative reaction all around France. Jay-Z and Kanye West’s video for the song “No Church in the Wild,” directed by Gavras, was released on YouTube May 29 and has more than 3,000,000 views since.

The clip begins with a masked person with a lighter ready to set a Molotov bomb off, which he throws against policemen. The 5-minute-long video shows the violent fight between citizens and police, nightmarish scenes of the battle, policemen on fire, cars turned upside down, abandoned houses and stores. All this takes place in downtown Paris.

The Greek French director films what he sees as true situations and does not want to explain what he thinks about these scenes. “When an artist decides to say something, he says that through his work. If they explained what they mean, then they could confuse the people and make things even worse,” says Romain.