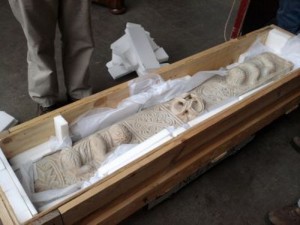 Two stolen ancient items, which were displayed until recently in the UK, were transferred to Greece and are now hosted by the Athens Byzantine and Christian Museum beginning as of Wednesday, May 30.
The items will be kept in Athens only temporarily at the Museum, until being given to representatives of the appropriate Ephorates of the Hellenic Museum of Culture.
The Byzantine and Christian Museum has been hosting two items, a Byzantine marble ancient tractor-like item, dated back to the 11th Century, which was stolen from the Church of  Metamorphosis in the Nomitsi community of the Prefecture of Messinia. The other one is a paper of Byzantine psaltery, also of the 11th Century, stolen by the Monastery of Great Lavra (Megisti Lavra) in the Holy Mountain of Athos.
Both pieces were delivered to the Greek Embassy in London by the Archdiocese of Thyateira and Great Britain.