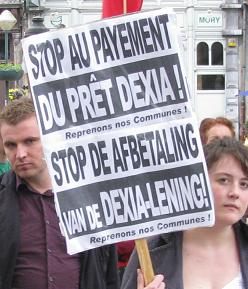 Last night, a protest was held outside the “Commune” (city council) of St-Gilles, in Brussels. The protest was part of the campaign of left wing parties “Reprenons nos communes” (Take back our communities) organized by Party Socialiste de Lutte (Socialist Party of Struggle), Party Humaniste and Comité pour une Autre Politique (Committee for another policy). The main demand of the protest was to stop the increase of energy and gas prices. Protestors claim that the rise in prices are due to the failure of Dexia, a bank that was partly bailed out by the Belgian government. The communities in Brussels and in other cities were part owners of Dexia and now they are passing the cost of the bail-out to the citizens, protestors underline. The protestors have gathered enough signatures from residents to pose a question to the Mayor at the city council meeting. The last elections took place in 2006 and the current majority is held by the Belgian Labor party.

Along with its partners in Luxembourg and France, Dexia formed the biggest and most profitable Belgian company according to 2010 Fortune Global 500. In 2008 it was hit by the global credit crunch as US mortgages were part of its portfolio. The price of the share fell rapidly after Moody’s downgraded the bank to C-and it was forced to ask for a bail-out. This support was assured within days, taking two forms: a capital injection of €6.4 billion, consisting of €3 billion from the Belgian State and regional governments, €3 billion from the French State and Caisse des Dépôts et Consignations and €376 million from the government of Luxembourg, a state guarantee (effective from 31 October 2008) covering Dexia’s liabilities towards credit institutions and institutional counterparts, as well as bonds and other debt securities issued for the same counterparts, for a total maximum amount of €150 billion. Belgium provided 60.5% of the guarantee, with a 36.5% contribution from the French state and 3% from Luxembourg. Dexia had invested largely in Greek, Spanish, Portuguese, Italian and Irish yield bonds. The final blow was the restructuring of the Greek debt, the famous PSI, which was a voluntary exchange of yield bonds between the Greek government and bond holders. The loss for the bond holders was more than 50%.

In an interview held outside the Commune of St. Gilles, a leading member of the campaign, Tim Joosen, explains what triggered the protest.

-When did the problem with the Commune and Dexia start?

I think it’s a problem with all the authorities in Belgium. The policies of privatization means that the federal and local authorities have less and less revenues. Therefore they do cutbacks and invest money on banks and private companies hoping that this will get back more revenues. This is off course a very dangerous attitude. It works for a couple of years but it is not safe. Markets can go down or up. This is what happened with Dexia. Dexia was owned by the Communes for a big part and they were pushing the directors for high risk investments which would bring big revenues. They invested in sub primes in the US and Greek, Spanish, Italian bonds. It was a high risk investment and it didn’t work. Now the Commune of St. Gilles wants to rise taxes on electricity and gas. The Communes have their own system of transmitting energy and they are asking for taxes from the citizens. Taxes are already on the rise in the Communes the last couple of years.

-Was the collapse of Dexia a result of the restructuring of the Greek debt which took place a few months ago?

-When did the Communes start increasing prices in gas and electricity?

Prices started rising right after the privatization. The production and distribution of energy used to be a public service in Belgium until it was privatized. The company was owned partly from the Federal government and the Communes. The privatization meant that the Communes lost a lot of revenues. Since the distribution of energy remains at the hands of the Communes they started rising taxes on distribution to make up for the lost revenues. The big rises though took place when Dexia collapsed, so there is a direct link between Dexia and the rise in community taxes.

-Do you blame Greeks for the restructuring of debt and the collapse of Dexia?

I do not think it is the Greeks to blame. Greece had a lot of poverty even before the crisis. We have heard in the news that Greeks had high wages, high pensions etc. but I know this is not true. The people responsible for the economic crisis are the 1%. Those who never pay any taxes, the banks, the shipowners, the same people are responsible for the economic crisis in every country.

-When did you find out that the Commune was raising taxes to make up for the losses of Dexia and what was your strategy?

There is a committee responsible for keeping an eye on the prices in the open market of energy and the communities. It published some very worrying reports the few last years where it said that in comparison with France and Germany, the neighboring countries, Belgium has had high increases in the price of energy. It also pointed out that Belgium has one of the highest prices for energy in Europe. Prices are higher in Brussels which doesn’t make any sense because as a city it has the advantage of big scale. So we asked where that money goes and a part of the answer was that money goes to make up for the losses of Dexia.

We mainly spoke about numbers. The last couple of years the price of distribution has doubled. Since the published budget states the total amount of revenues but not their source. We had to read the annual reports of the production companies and see what kind of expenses they charged on the Commune. The Mayor didn’t refuse that but said that the rise in costs were on ‘exceptional’ costs which rose every year. They also said that they sold some parts of the distribution company, which is owned mainly by the Commune, so they had to collect more revenues through taxes. The Commune keeps passing the cost of their policy on the local people, they have been creative in creating extra costs in 2010, 2011 and 2012 to make up for the losses. But of course they don’t care about the fact that these taxes are an additional burden on family budgets.

-What are your demands and how do you plan to continue?

We will keep an eye on the numbers. They promised us that they will publish more about the actual revenues and their sources. Of course this will not make the rise go away. We told the Mayor that since St. Gilles is a big community it can put pressure to stop the increases in the company owned by the Communes. We will continue to organize and we are going to fight every antisocial cut. We will keep on informing the public and protesting in the Commune. We also want to raise concern about national politics as the local issue is just a reflection of policies in the state level. We must mobilize and organize and not be afraid to stand up.