Basketball: Olympiakos is the New Champion of Greece 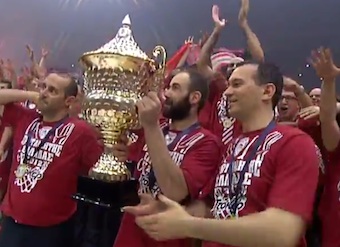 Olympiakos won the Greek basketball league for the first time in 15 years by beating defending champion Panathinaikos 82-76 in the finals decider on Saturday.
Panathinaikos had dominated the league in that span, winning 13 of 14 titles to add to its five Euroleague trophies.
Last month, Olympiakos also won the Euroleague, also its first in 15 years.
Vassilis Spanoulis scored 24 points to lead Olympiakos, which used a 10-2 surge at the start of the second quarter to take a 34-20 lead. Just before halftime, it led by 16 at 48-32.
Panathinaikos had a 13-0 run to close within 48-45 but Olympiakos pushed the lead back to 16 points (77-61) before Panathinaikos made a final, desperate effort.
Guard Nick Calathes led Panathinaikos with 17 points.
(source: AP)