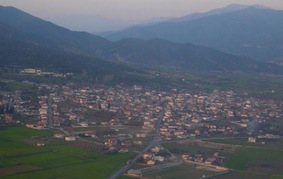 More and more Greek businesses search for a more financially stable environment abroad, and thus, they migrate to areas, such as Petritsi in Bulgaria. Petritsi is a small town near the Greek Bulgarian borders with about 20,000 residents, where, during the past three years, investments up to 3 billion euros have been made.

A Greek restaurant is in the center of the small Bulgarian city. Its owner, Dionysis Papadatos, says the financial crisis made him migrate to have a better future. “Greeks do not want to goto Bulgaria only. They need to go away from Greece in general,” comments Papadatos.

George Constantopoulos’ firm was transferred from Thessaloniki to Petritsi. Nowadays, 50 people work in the firm’s modern facilities. “Greeks do not trust the Greek state any more. Every month we hear about something new – taxes, taxes and more taxes, ” explains Constantopoulos.

Bulgaria seems a pretty good choice for the businessmen, because there is lower taxation, lower wages and mostly, more stable financial environment than Greece.

In the center of Petritsi, but also in the surroundings areas, there are decades of Greek businesses: stores, restaurants, cafeterias. “Almost 100 Greek businesses ‘migrate’ to neighboring Petritsi,” stresses deputy mayor Cristo Batev.

But Greeks do not head for Bulgaria only for jobs, they visit Bulgaria once or twice – mostly, people living in the Northern part of Greece – to shop in the Bulgarian supermarkets and stores. The Greek Bulgarian Chamber of Commerce announced that approximately 40,000-50,000 job positions in Bulgaria depend on Greek businesses and visitors.

The Bulgarian Finance Ministry says that Greek businesses willing to transfer their headquarters in Bulgaria have been multiplied by 10.

Ancient Greek Necropolis to be Revealed in New Exhibition Site