GRNews
GreekReporter.comWorldAfricaGreek Orthodox Church Bishop to be Enthroned for First Time in Botswana 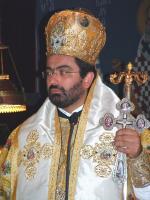 Patriarch Theodore II of Alexandria is expected to arrive at the South African country on June 1, and will be the one to ordain the new Bishop of Botswana Gennadios Stantzios on the following day at the Anglican Cathedral in Gaborone. The enthronement is expected to be attended by several Bishops from across the continent, Greece, Europe, as well as politicians and MEPs.

Bishop Gennadios has been deeply involved in promoting the work and action of the Greek Orthodox mission in the country for the past two years. Bishop Gennadios noted that his top priority is to build the first Greek Orthodox Cathedral in Botswana. His future plans include the establishment of a medical centre and pharmacy with the help of English, Canadian, Norwegian, Ukrainian and other doctors and nurses.

The Greek Orthodox Diocese of Botswana has been officially recognized by the local authorities in July 2011. The Diocese has already signed several memoranda of cooperation with the Anglican Church and other parishes in order to promote the development of humanitarian and medical programs, especially the support of the workings of Holy Cross Hospice which helps children with AIDS in Botswana and South Africa.

During his stay in Botswana, the Orthodox Patriarch of Alexandria will meet with the President of the Republic Seretse Khama Ian Khama, as well as with representatives from the Orthodox communities. Theodore II will also visit children hospitals and will also bless the real estate where the first Orthodox Cathedral is to be built.

Gennadios Stantzios was born in 1969 in Eslingen, Germany. He graduated from the Theological School of the Aristotle University of Thessaloniki, Greece, and continued his master studies in the Urbaniana University of Rome. He has worked in Buenos Aires, Argentina and recently in Port Elizabeth and Cape Town in South Africa, and speaks fluently English and Italian.