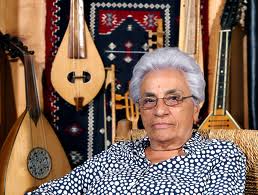 The Athens Festival organized an event to pay tribute to the late Domna Samiou. She was an artist of a unique kind, always trying to designate Greek traditional music.
On July 8, officials of the Herodes Atticus Odeon in Athens, occasioned by the Athens Festival 2012, decided to honor a woman who taught us our traditional songs and made us love Greek folk music once again.
Famous Greek artists, including Eleftheria Arvanitaki, Manolis Mitsias, Dimitris Bassis, Caterina Papadopoulou and Dionysis Savvopoulos, will sing some of Domna Samiou’s beloved songs.
“She is a person who comes to us from another time and due to this difference, she has the ability to comfort us and this way, we change little-by-little,” wrote Dionysis Savvopoulos some time ago.
Samiou, who passed away on March 10, 2012, was born in Athens. Her parents were refugees of Anatolia and had lived in a small village outside Smyrna before they were forced to leave their home. Her mother came to Greece, while her father came four years later because he was imprisoned in Turkey. In Smyrna, Domna Samiou once said when she first listened to folk music, she fell in love with it.