TechNews
GreekReporter.com Greece Police and Employees of the Municipality of Thessaloniki Clash

Police and Employees of the Municipality of Thessaloniki Clash 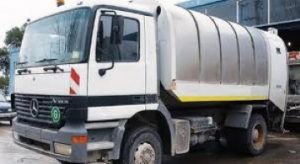 Tension was provoked between police and municipal employees on Wednesday morning outside the Town Hall of Thessaloniki.
The employees are opposed to the possibility of of the privatization of the cleaning service of the main municipality. The employees, who went on strike, are protesting against the international open competition proclaimed by the authorities, regarding the assignment of the garbage vehicles’ repair to private companies.
Protestors tried to enter to the amphitheater where there was a counsel taking place of the economic service of the municipality regarding its last decision about the privatization. The protestors were forced to leave by police, who were standing outside, and even used chemicals to break the protest.
The counsel closed with two offers. The Deputy Mayor of Cleaning, Hasdai Kapon, claimed that there was no privatization of the whole service, just the opportunity for garbage vehicles to be repaired quickly by private companies.
Greek Communist Party, KKE, accused the mayor of Thessaloniki of ”hostility towards the people and the employees.”