GRNews
GreekReporter.comEuropePatriarch Conducts Service in Cappadocia for the First Time Since 1922

Patriarch Conducts Service in Cappadocia for the First Time Since 1922 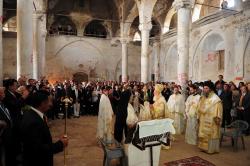 Hundreds of worshippers joined the Sunday Service conducted by the Patriarch at the Holy Church of Saints Vassilios and Vlassios in historic Misthi, Cappadocia.

According to the website fanarion.blogspot.com, for the very first time since 1922, when many Orthodox churches in Cappadocia stopped operating, Patriarch Bartholomew, along with metropolitan bishops from Buenos Aires, Tarasios, and of Kissamos and Selinos Amfilochios, led the ceremony.

Many people who attended the service felt moved. Many other clergymen were present at this historic service, including Metropolitan bishop of Drama Pavlos and of Neapolis and Stavroupolis Varnavas, as well as Orthodox people from Greece, the USA and other countries.

The previous day, Patriarch Bartholomew conducted the vespers, which took place in the renovated Holy Church of Saint Nikolaos of Sinassos.

This ceremony is of great political and social importance, as both countries begin to realize that their long-held hostility belongs to the past and that religious spirit has nothing to do with politics. It’s a good step for the neighboring countries to begin to respect each other’s differences, whether cultural or religious.