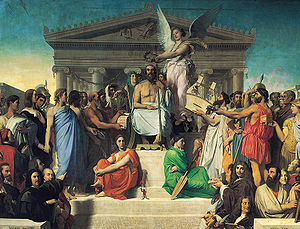 Two words for you today that came from the Greek Poet Homer.

The word amen comes from the latin “amen,” the well known amen that we all know from the Bible and all the Christian scripts. What most of us don’t know is that amen comes from imin (true or truthful; better pronounced emen; Gr: ή-μήν; in Hellenistic Era as ημέν), first found in Homers Iliad (rhapsody b, verse  291 – 301) “The Dream of Agamemnon and the Catalogue of Ships” (Ιλιάδα Ομήρου β291-301). The evolution of amen in Greek “slug” language is ame (I agree, I will do it, or yes; Gr: αμέ)

The word glamour comes from the latin “gramo ur” that originates from the greek word grammario (gram or gramme; better pronounced grammário; Gr: γραμμάριο). During the middle ages, magicians and alchemists brewing recipes with ingredients measured in grams and as the whole process was fascinating and prestigious, especially to the people of that era that they had no knowledge of chemistry or physics, the gramo ur-glamou r, took its present meaning glamour because it was something impressive to others.