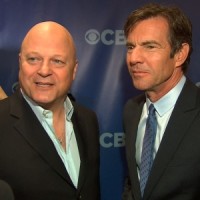 Michael Chiklis is a busy man lately. In addition to this Friday’s theatrical release of his new film “High School,” the Greek-American actor is set to star in a television program airing on American broadcast network CBS in the fall.

This September, the 1960s-style drama “Vegas” will premiere with Michael Chiklis as mob boss Vincent Savino and Dennis Quaid as local sheriff Ralph Lamb, whose job it is to make sure the gangster isn’t misbehaving in Sin City. The show is a clash of lifestyles – western cowboy vs. big city mobster.

“Vegas” is set to air Tuesday nights at 10pm.

Here’s a sneak peek of the television series: