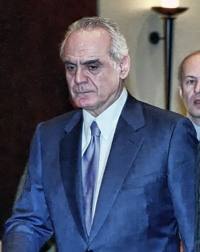 The steadily unfolding bribery scandal of defense procurements revolving mainly around the former Greek Defense Minister Akis Tsochatzopoulos could easily rank the case as a top class scenario for a future John le Carré novel. Unknown revealing details have come to the surface again and again, shedding light on the under-the-table deals concerning the Russian TOR-M1 air missile systems that allowed the former minister and his family to enjoy a lavish way of life.
Besides the complex money transactions and middlemen delivering the money to the hands of the Tsochatzopoulos couple, the case also includes the cold blooded murders of Russian investigators in Moscow.
According to a Proto Thema report, on February 29, 1999, the then Greek Defense Ministry general secretary Yiannis Sbokos and the general director of Almaz-Antey Igor Vorobiev signed a contract on the supplying of TOR-M1 systems. Until 2002, the missile systems were normally delivered, but no one cared enough for the respective offsets worth $73 million before Spiros Travlos, who replaced Sbokos, discovered that Drumilan Offset Programme Ltd (the company responsible for implementing the offsets) had shut down its offices in Athens and its representative Fouad Al Zayat and his Greek partner Vlassis Kabouroglou had disappeared.
After this discovery, Travlos contacted the new director of Almaz Antey Igor Klimov asking for explanations. Being one of the most powerful people in Russia and a close friend to Vladimir Putin, Klimov found out that from the initially disbursed amount of $73 million to Drumilan Ltd some $45 million were transferred to a bank account in the Western Bank in Montenegro with the help of the public prosecution office of Moscow. Another $12 million were tracked down in a bank account belonging to the company’s former general director Vorobiev in the Privi Bank of Moscow. Given the new findings, Putin ordered Klimov to lead an official investigation in Greece, which would trace the lost money. Moreover, Putin asked for Vorobiev’s house arrest until the economic crime case was thoroughly investigated (in a document confiscated from the office of the former Greek minister dating back to 2009, Tsochatzopoulos wrote “Vorobiev: what did he testify?”)
In May 2003, Russian officials arrived at the Greek Pentagon and met with with Travlos and their Greek counterparts for four days examining the case, continues the report. A month later, Travlos decided to pay a similar visit to Russia and on June 6th he had a scheduled meeting with Klimov in the Red Square. After a long wait, Travlos was informed by men from the Intelligence Services that Klimov had been murdered and now he was asked to take protection measures. On the same evening, Sergey Sitko was also murdered in a small town outside Moscow. Sitkos was a close partner of Klimov and president of a subsidiary of Almaz.
According to the case file, eye witnesses told the police that Klimov’s murderers tried to take a briefcase away from him. Nevertheless, the Russian authorities attributed Klimov’s murder to the civil war raging in the country over oil control.