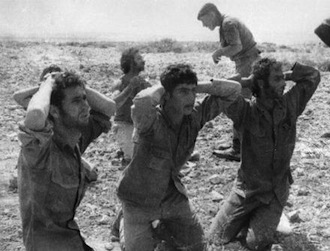 The Republic of Cyprus has submitted to the Committee of Ministers of the Council of Europe a Memorandum which reveals that the Turkish army is in possession of information related to the identity and the burial sites of killed Greek Cypriots during the Turkish invasion in 1974, as well as other concrete references to persons taken alive in custody of the Turkish army and are today still missing.

The Memorandum, prepared by the Cypriot Authorities, is entitled “Greek-Cypriot Missing Persons and their relatives – The Need for Effective Implementation of the Judgment of the European Court of Human Rights in the case of Cyprus v. Turkey”.

Attached to the Memorandum, there is a Note entitled “Eyewitness information from high-ranking Turkish army officers who took part in the 1974 Turkish invasion”, pertaining to a book written by professor Erol Mutercimler, a well-known Turkish writer.

According to a letter sent by Permanent Representative of Cyprus to the CoE, Ambassador Theodora Constantinidou, to the Committee of Ministers, the book describes certain cases which give concrete evidence by high ranking officers of the Turkish army, who took part in the 1974 military operations in Cyprus, that the Turkish army is in possession of information related to the identity and the burial sites of killed Greek Cypriots civilians and soldiers, as well as other concrete references to persons taken alive in custody of the Turkish army and are today still missing.

According to CNA sources, in the Memorandum, it is noted that Turkey not only has not proceeded to an effective investigation according to the strict findings of the European Court of Human Rights in the case of Cyprus v. Turkey, but it has also caused great difficulties and posed many obstacles to the direction of investigations.

It is noted that in the judgment of Varnava and Others v. Turkey (18 September 2009) Turkey is called upon to immediately hand over any official documentation in its possession containing information on the activities of its armed forces or others under its control that may be relevant to investigations and prosecutions for crimes under the law.

“The issue of missing persons is a humanitarian issue with human rights and international humanitarian law implications. It should not be treated as a political issue and consequently its solution should not be influenced by any other considerations. The right to know the fate of missing relatives is a fundamental right of the families concerned and must be guaranteed”, it is stressed.

It is reminded that according to the Court’s judgment, “the silence of the authorities of the respondent State in the face of the real concerns of the relatives of the missing persons attains a level of severity which can only be categorised as inhuman treatment within the meaning of Article 3”.

“When one considers that currently no more than three identifications a month are concluded, it can be estimated that it will take many more decades before all the relatives might be informed of the fate of their loves ones“ it is stressed, adding that without the full and urgent cooperation of Turkey, the efforts to give answers to the relatives will remain incomplete.

It is pointed out that “the very limited yielding of results is attributable to the simple fact that the Turkish authorities do not cooperate with the CMP”.

“The CM-DH has repeatedly requested, as a matter of urgency, that Turkey take all necessary concrete measures, including access to all relevant information and places. Turkey’s continuing failure to do so has been amply documented by the United Nations Secretary General”, the Memorandum says.

It is reminded that the Government of Cyprus has repeatedly requested Turkey to provide the CM-DH with concrete information contained in the reports and archives of the Turkish army, as well as information gathered from clearing the battlefields and burial places in the occupied part of Cyprus.

It is recalled that to date, information on graveside locations came directly from ordinary Turkish -Cypriots, and not from the official Turkish authorities or the Turkish military.

The Memorandum stresses that in recent years, high ranking officers of the Turkish army who served in Cyprus during the Turkish invasion have published memoirs.

In these, most valuable information concerning battles, persons killed and others detained has come to light while some of this material also includes military reports.

“Such information proves the validity of the arguments of the Government of Cyprus pointing to the importance of this material”.

The Memorandum includes an attachment with evidence provided by high ranking officers of the Turkish army, who took part in the 1974 military operations in Cyprus “that reaffirm those acts of violence and inhuman treatment”.

The book of the well known Turkish writer Erol Mutercimler, “Satilik Ada Kibris: Kibris Baris Harekatinin Bilinmeyen Yonleri” (“Cyprus: The island on sale – Unknown Aspects of the Cyprus Peace Operation”) contains the memoirs of three high ranking officers who took part in the Turkish invasion, serving as commanders and deputy commanders of units of the Turkish armed forces. In these memoirs, there is a wealth of reference to arrests of Greek-Cypriots and the burial of dead soldiers and civilians.

“Unless Turkey cooperates without further delay in order to effectively investigate and solve the cases of the missing by, inter alia, sharing information it has at its disposal and by allowing excavations and exhumations throughout the areas under its control, the fate of the missing will remain unknown and the judgment will remain unimplemented“, it is stressed.

In the Memorandum Member States are called upon to urgently call on the Turkish authorities to inform the Committee of the measures it will take and of the specific time frame, with a view to the effective investigations required by the judgment, to ensure access to all relevant information, including, as a first step, information from battlefield reports contained in the reports/archives of the Turkish army and to allow immediate and unconditional access for exhumation purposes to actual military zones in occupied Cyprus (including fenced camps), where it is believed that persons whose fate is unknown have been buried.

They should also call on the Turkish authorities to inform of the location of the remains of Greek – Cypriots secretly removed from mass burial sites in the occupied part of Cyprus by the Turkish army and the CM -DH could invite the Turkish retired military officers whose names appear in the book of Prof. Mutercimler and/or the author himself to share valuable information and respond to the questions of members of the CM-DH.

Cyprus has been divided since 1974, when Turkey invaded and occupied its northern third. As a result of the invasion, 1619 Greek-Cypriots were listed as missing, most of whom soldiers or reservists, who were captured in the battlefield.

Among them, however, were many civilians, women and children, arrested by the Turkish invasion troops and Turkish-Cypriot paramilitary groups, within the area controlled by the Turkish army after the end of hostilities and far away from the battlefield. Many of those missing were last seen alive in the hands of the Turkish military. A further 41 more cases of Greek Cypriot missing persons have been recently added. These cases concern the period between 1963-1964, when inter-communal fighting broke out but none of them has been identified yet.

The number of Turkish Cypriot missing since 1974 and 1963/64 stands at 503.
According to figures released by the three-member Committee on Missing Persons, the remains of 297 missing individuals – Greek Cypriots and Turkish Cypriots – were returned to their families for proper burial.
(source: cna)