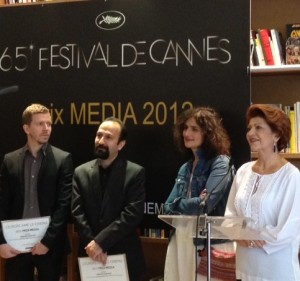 CANNES – Androulla Vassiliou, the Cypriot European Commissioner for Education, Culture, Multilingualism, and Youth, arrived in Cannes in order to promote the EU’s MEDIA program and give the first ever ‘Prix MEDIA’ award to Iranian filmmaker Ashgar Farhadi, the director of ‘A Separation’, which won the Golden Bear at the Berlin Film Festival in 2011.  The ‘Prix MEDIA’ award recognizes the filmmaker of a project with the best box-office potential, and helps financially support the film’s production.  Farhadi is about to film a new project in France, which will star the A-list actress Marion Cotillard.

Ms. Vassiliou has been in her current position for two years, and was previously the European Commissioner for Health (2008-2010).  She spoke to Joanna Kalafatis, Greek Reporter’s correspondent in Cannes, about the importance of the MEDIA program in Europe, and the funding she is seeking in order to expand the program’s reach and scope.  The Cypriot commissioner’s interview is below.

Talk to us about the MEDIA program and its objectives.

The MEDIA program financially supports European film and television; so far, 1.6 billion euros have been spent on various cultural projects through the program.  In general, we try to promote intercultural relations and cultural dialogue, so we support projects which are a product of cooperation between at least three countries.  Right now, the MEDIA program supports 2000 projects every year for approximately 100 million dollars annually.

You have recently requested extra funding in order to expand the scope of financial support for film and create a new program, ‘Creative Europe’.  How will that program work?

‘Creative Europe’ is a funding program for 2014-2020, for which we have requested a budget of 1.8 billion.  The program will have three strands: culture, media, and a new section specifically involving film financing.  This section will have 900 million euros at its disposal, and the money will be used in order to help small creative industries (such as film and audiovisual entertainment) get loans from banks.  Since most such small industries do not have the collateral to easily obtain loans, the EU will back their requests and provide their guarantee to the banks.  The European Investment Bank and the Investment Fund will be the organizations handling the money and cooperating with the local banks.

Given the current crisis in Europe in general and countries such as Greece, do you think it will be harder to allocate this amount of money to creative industries in the EU?

No, because we have found that through culture and film, we can stimulate economic development and create jobs.  Currently, 8.5 million people in the EU are employed by the creative sector; of those, 1.2 million people are in film & TV.  This sector is actually one of the few that has not undergone a decline or massive layoffs during the latest financial crisis, so it is important to keep supporting this thriving industry.  That is what people sometimes forget, that film, TV, and culture is not just an outlet for personal enjoyment, it is also a thriving industry.  The Council of Cultural Ministers in Brussels has also adopted this stance, thus enabling us to fund projects such as Creative Europe.

What is the biggest goal you hope to achieve by supporting filmmakers through ‘Creative Europe’?

One area that we want to develop further is gaining a larger audience.  We want to encourage and give opportunities for involvement in culture and TV to poorer sections of society, to immigrants and visitors to the EU, to children, and to other people that may not make up a large part of our audience today.  Our idea is that we want to organize programs for schools to show European films, which will showcase the artists who have created them.  We will also hold discussions after the showings, in order to encourage dialogue regarding the messages of the films.

How will the program help European film and TV compete with the US industry?

The difference between European and US cinema is the messages and values shown through film, which in Europe are geared more towards stimulating ideas and discussion rather than pure entertainment value.  We want to therefore use these school programs to create ‘media literacy’, to create a new generation of viewers more in tune with the European creative industries as well as US entertainment.

That is why part of the proposal for the program’s expansion will include promoting series like the ‘Borgias’; though its production calls to mind US shows, it has been created in Europe based on European stories, and we want to promote stories like this in order to compete with the imported US shows on European TV.