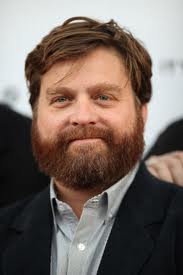 A new political comedy titled ‘The Campaign’, starring Greek-American Zach Galifianakis, is the perfect occasion for him to talk about the political and financial situation of Greece.

“Greece is the country which gave birth to culture and made humanity deal with souvlaki and spinachpie,” said the comedian. “Maybe Greece is an ecumenical indigestion right now; but be certain that this country does not obey, is not harnessed by anyone, and that it is able to turn its embers into gold,” added Mr. Galifianakis.

“Greece reminds me somehow of myself in the movie – loser and winner at the same time,” continues Zach, connecting his homecountry to his role. Galifianakis plays a naive middle-class person, who suddenly becomes a senator in Washington DC and tries to put everything in order.

During the film promotion, Zach insisted on connecting the journalists’ questions to the Greek problem. One of the most typical responses is, of course, his statement “Hangover and baloney – Europe is in turmoil due to financial problems and America in dizziness.”

“In the world’s ‘political living rooms’, officials discuss if Hollande will prove to be better than Sarkozy and if my homecountry, Greece, will manage to find a solution or bear down on moussaka and tzatziki, giving indigestion to the whole planet,” he comments.