GRNews
GreekReporter.comLifeentertainmentCannes 2012: And the Palme d'Or Goes to "Amour" (video) 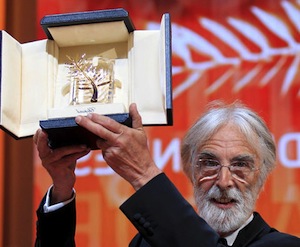 The 65th Cannes film festival has handed out its top prize Palme d’Or to “Amour”(Love), as it wrapped up with a star-studded closing ceremony here on the rainy Sunday night in the French Riviera resort.

The ceremony came after all stars walking on the soaked red carpet, as “The Artist” star and hostess Berenice Bejo said, “Nothing will stop the cinema, especially not the rain.”

Journalists were packed like sardines in a moderate-size wifi cafe on the third floor of the palace, highly concentrating on the awards announcement live broadcast on TV while bursting into applause and hails from time to time.

Starring two French legendary stars both in their 80s, namely Jean-Louis Trintignant and Emmanuel Riva, “Amour” tells a story of an old man looking after his frail wife hit by a stroke, with actress Isabelle Huppert as the daughter.

Watch highlights from the festival and the red carpet from “Amour” as Greek Reporter’s camera recorded it in Cannes.

Besides the Palme d’Or, the second-place grand prize went to Matteo Garrone’s “Reality” while the third-place jury prize was given to Ken Loach’s “The Angels’ Share.”

Mads Mikkelsen was awarded the best actor for “The Hunt” while Cristina Flutur and Cosmina Stratan were jointly given the best actress award for starring in the “Beyond the Hills.”

Carlos Reygadas took the best director award home for his “Post Tenebras Lux” that features a story of a Mexican family, while Cristian Mungiu’s “Beyond the Hills” was given the best screenplay award and Benh Zeitli’s “Beasts of the Southern Wild” won the Camera d’Or for best first film.

Last year, the Palme d’Or went to “The Tree of Life” by veteran American filmmaker Terrence Malick, while this year’s 22 competition films were picked out of nearly 1,800 submissions.