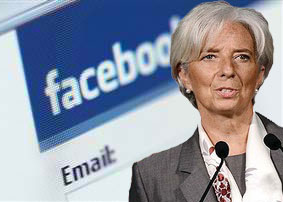 Hundreds of outraged Greek Facebook users wrote more than 1500 comments on Christine Lagarde’s profile after she told the Guardian newspaper in an interview published online on Friday, that “she is more concerned about sub-Saharan Africans in poverty than Greeks hit by the economic crisis.”
As one can easily understand, the comments are not exactly flattering for the IMF boss who accused Greeks of tax evasion and said that she felt no pity whatsoever for the Greek children who faint out of starvation in schools, adding that if their parents are stressed about their children’s future they should start paying their taxes.
“I’m more worried about children in sub-Saharan countries who have no water and get two hours of teaching per week” , said Ms Lagarde.
Some users called her old and ugly, others said she looks like a monster and she should take it easy on the solarium while one particular user wrote that “the worst scenario for a man is to be found on a desert island with the only woman being Lagarde!” Many of the users urged Greeks to report Lagarde’s Facebook account for “targeting the nation” and racism.
Despite the fact that these comments are of little significance, one can’t help but wonder why Ms Lagarde made these comments. Now that the public debate in Europe increasingly moves towards finding a way out of this barbaric, suicidal austerity policy, statements like these sound more and more inappropriate, and not at all elegant. There is a French saying, “noblesse oblige”, which means “nobility obliges” that with wealth, power and prestige come responsibilities and a certain type of behaviour. No, Ms. Lagarde should not make this kind of populist statement. Populism doesn’t suit her.
Lagarde Expresses… Sympathy for Greeks After Tax Evasion Comments
After International Monetary Fund managing director Christine Lagarde has issued a statement clarifying comments with regards to Greeks not paying taxes after her Facebook page was bombarded with negative comments from irate Greeks and the country’s political parties slammed her assessment.
In a statement late on Saturday, Lagarde expressed sympathy for Greeks “and the challenges they are facing” and said that her comments regarding tax evasion were in reference to the “most privileged”.