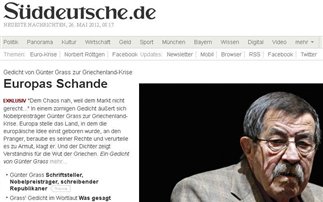 Guenter Grass is a German Nobel Literature Prize winner who wrote, two months ago, a proza poem commenting on Israel’s policy regarding Iran. Back then, world society raised eyebrows and disapproved of his poem, due to “poetic faults,” such as not excellent rhyme etc. This time, he expresses his opinion in public about Greece with his poem ‘Europe’s Shame’, published on Süddeutsche Zeitung.

In the poem, he supports Greece, saying that Europeans turned the country into “Greece without any rights.” He complains about European policy over the financial situation in Greece, which is “close to chaos because it does not obey the markets.”

As a debtor, “Greece is notorious, a country doomed in poverty,” and Europe “tightens more and more the strap around its neck.” Grass blames European governors that stifle “every breath of life” that Greece takes with the austerity measures they impose on the country.

He also compares the current situation with Socrates’ trial and suicide. As Socrates drank his cup of hemlock willingly, Guenter Grass declares that indebted Greece reacts to this negative policy but modern juries shout “Drink, drink at last!” However, “enraged Socrates returns to you the overflown cup,” praising Greeks for their resistance to several extortions.

And he adds that Greece “is now worth even less than scrap iron.” But he stresses the fact that the EU is based on Greek culture, that our home country is the foundation stone of Europe in general and thus, the Union undermines its own values. “What you searched with your soul, what you believed you found, seems now unimportant,” writes the Nobel Prize winner.

He also reminds his fellow countrymen of Germany’s role during WWII. “Those who wounded with guns’ violence this blessed with islands country, brought with them in their army rucksacks Hölderlin,” suggesting that just like Friedrich Hölderlin who suffered from loneliness, Germany will end up alone, too.

Grass warns: “You will waste away spiritlessly without the country whose spirit, Europe, conceived you.”