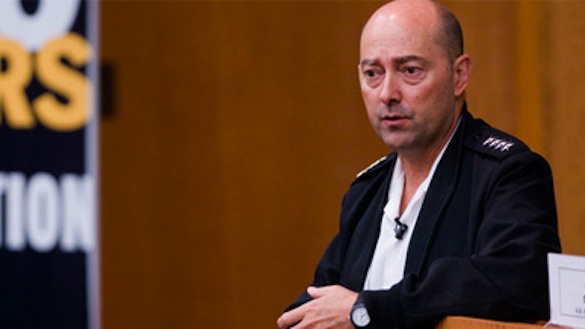 “Reading about other cultures, social networking, and other “smart power” tools can help create security in the 21st century.”

That was the key message from Greek-American Admiral James G. Stavridis, commander of the United States European Command and NATO supreme allied commander, Europe, who spoke to the Kellogg community on May 18. Stavridis was attending the 2012 NATO Summit in Chicago.

Learning from the past
Stavridis explained that a bridge is a perfect metaphor for 21st century security.

“Bridges connect us,” he said. “When we look back at 20th century security, it was all about separation; it was about building walls.”

Fortunately, a new mindset, one based on connections rather than separation, began emerging as the Cold War ended in the late 20th century, Stavridis added.

‘Smart power’ strategies to build security
“Smart power” is a combination of “hard power” — exercising military and/or economic coercion — and “soft power” — using tools such as persuasion and diplomacy. Stavridis, a firm believer in smart power, offered some practical ideas for using this approach to foster security, including:

Stavridis concluded by sharing the vision statement from free online encyclopedia, Wikipedia: “A world in which every human being can freely share in the sum of all knowledge.”

“Wikipedia is a perfect example of the fact that no one of us is as smart as all of us thinking together — no one person, no one alliance, no one country,” he said. “My hypothesis for you today is that by connecting in this 21st century security world, we can share in the sum of all security.”

Stavridis’ talk was hosted by the Kellogg Innovation Network (KIN) and the Kellogg Veterans Association.