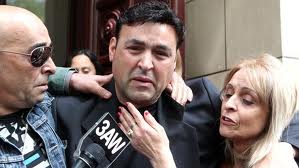 A Greek living in Melbourne who has survived a murder attempt made by his wife, sued her and is asking for compensation amounting to $3 million.

Chris Soteriou was a businessman who was stabbed in 2010 by his wife’s lover on his birthday. Vicky Soteriou and her lover, Aris Dimitrakis, were both found both guilty in the Australian Supreme Court. The woman gave Dimitrakis the knife to kill her husband so they could “live forever together.”

Fortunately, after being stabbed seven times, Chris survived but, as he claims, his psychological shock was so big that he did not manage to work again after this incident. He has lived off of his family’s money all this time.

“I have seriously suffered a diminution in my sense of self-worth, and everything I wish and wanted for my family must now be recast,” he says.

And he explains that, while he was for several days in the hospital recovering from the murder attempt, his wife’s family took items amounting to $100,000 out of his house and Vicky withdrew $200,000 from the bank. With some of this money, the she bought hers and her lover’s tombs.

Chris added that he is not allowed to use any of the family assets because they were in his wife’s name and frozen under court order.