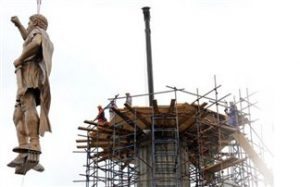 One day after NATO’s statement that FYROM should solve the Macedonian name problem, before entering NATO, Skopje put up the statue of Philip II of Macedonia, father of Alexander the Great, in downtown Skopje.

A year before, they also erected a 22-meter-high statue of Alexander the Great. Gruevski’s governmental officials decided to react to NATO’s announcement in this way, with the statue erection in front of the Ministry of Transport and Communications.

In order to avoid diplomatic episodes, as they try to convince Europe that it’s about time for the country to enter the EU, they named the statue “warrior.” They came up with the same idea for Alexander the Great’s statue, which was called “ranger warrior.”

Philip’s statue is 15 meters high and at its base, there is a fountain. The sculptor is Valentina Stevanovska, who is also responsible for Alexander’s statue.

Both statues, including many others similar to them, are included in the government’s project “Skopje 2014,” launched in 2010. Its goal is to give the capital a more monumental appearance, by building statues, bridges and museums, a program expected to cost about 500 million euros.

The attempt of turning Skopje into a theme park is severely criticized and is regarded to be a nationalistic kitsch, as unemployment rates hit high.