TechNews
GreekReporter.com Greek News Economy A G8 Push for Greece to Stay in the Eurozone, But No...

A G8 Push for Greece to Stay in the Eurozone, But No Answers 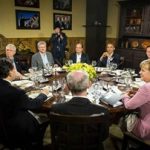 Even as Greeks found themselves caught in the twin nightmares of accepting more pay cuts, tax hikes, slashed pensions and mass firings, or the doomsday scenarios of returning to the drachma, 70 percent devaluation, lack of food, fuel, tanks in the streets, and anarchy, the leaders of the G8 representing the world’s biggest economies said they want Greece to stay in the Eurozone, but offered no solutions. At meetings in Washington, D.C., led by U.S. President Barack Obama, the political leaders said they believe measures to spur growth should coincide with the austerity measures that have plunged Greece into a deep recession of 21.7 percent unemployment and the closing of 1,000 businesses a week.
Fueled by rage against the harsh conditions imposed by international lenders in return for $325 billion in two bailouts keeping alive Greece’s essentially dead economy, voters in May 6 elections gave 68 percent of the vote to groups opposed to the austerity measures, but no party won enough of the vote to form a government, coalition talks collapsed and a second ballot is set for June 17 elections. Pro-European parties and the Troika of the European Union-International Monetary Fund-European Central Bank (EU-IMF-ECB) have warned that unless Greeks accept more austerity and another $15 billion in cuts under the next government, that the money pipeline would be shut off and the country forced to leave the Eurozone of the 17 countries using the euro as a currency.
Anti-austerity party leaders have complained those are scare tactics to allow Greeks to accept more pay cuts, tax hikes and slashed pensions and that the Troika would never accept the political and economic costs of Greece leaving the Eurozone and dumping the bill on the rest of the countries in the bloc.
The leaders of France, Germany, the US, the United Kingdom, Italy, Japan, Canada and Russia have been meeting at Camp David in the US state of Maryland. “We agree on the importance of a strong and cohesive Eurozone for global stability and recovery, and we affirm our interest in Greece remaining in the Eurozone while respecting its commitments,” the statement said. None of the leaders had any ideas how to do that, however, and as one analyst noted: “We affirm our interest in Greece remaining in the Eurozone’ is a pretty arm’s-length commitment – as lukewarm as the average moussaka.”
G8 leaders are divided on whether to continue with austerity or back stimulus measures instead. German Chancellor Angela Merkel favors austerity, while newly elected French President Francois Hollande wants to pursue policies for greater growth, as does Obama. UK Prime Minister David Cameron called for deficit reduction. “There is a growing sense of urgency that action needs to be taken, contingency plans need to be put in place and the strengthening of banks, governments, firewalls and all of those things need to take place very fast,” he told reporters at Camp David.
The office of the Greek interim prime minister said that Merkel had suggested the country hold a referendum on euro membership on election day, but her office dismissed the report as “false,” although a German reporter in the room said he heard Greek President Karolos Papoulias talking with her about the idea in German.
(Sources: Kathimerini, BBC, AP, Reuters)