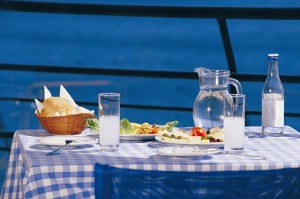 The love for their homecountry that characterizes Greeks of Malaysia plays a key role for the successful ten-day-long event they’ve organized in Kuala Lumpur.

From May 10-20, in a central hotel of the capital, traditional Greek dishes have won Malaysians’ heart, who want to taste something completely different from their cuisine.

“The Greek Food Festival was first proposed by a big hotel in Kuala Lumpur and we immediately got motivated,” said President of the Greek Community Miltiades Denediotis. “We do the best we can to introduce Greece to Malaysia,” added Denediotis.

According to Denediotis, in Malaysia, Greek cuisine is not so popular because there are no Greek restaurants in the country. “But the locals are somehow familiar with Greek dishes,” he admits.

Greek-Australian chef George Diakomichalis and his mother, Popi, cooked both salty and sweet foods for the attendants. The Greek Chef gave Malaysians some of the recipes as well.

On the opening day of the event, Honorary Consul of Greece in Malaysia Niotis Emmanuel was present, while members of the Community danced the famous syrtaki and taught Malaysians how to drink ouzo.

On May 18, the Greek Community of Malaysia will participate in Tastes of Europe Fest 2012, where each country presents its own dishes. The Greek display stand is the biggest of the event! Almost 1,500 people are expected to join the Fest, including professionals in the food sector, caterers, journalists and many more.

About 60 Greeks live in Kuala Lumpur, and work in big international companies, while others are self-employed.