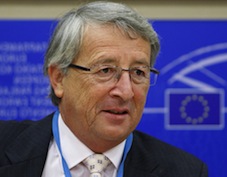 Finance ministers of the euro zone made a show of closing ranks around Greece Monday, with Eurogroup chairman Jean-Claude Juncker saying that no-one had argued for it to leave Europe΄s currency union at their monthly meeting, Dow Jones reported.
“The exit of Greece from the euro zone was not the subject of our discussions today,” group chairman and Luxembourg Premier Jean-Claude Juncker told a joint briefing after what appeared to be a generally inconclusive meeting. “Absolutely no-one has argued for that position.”
However, officials close to the talks suggested that Juncker had been stretching semantics, saying there had indeed been such a discussion, but that no one had supported a Greek exit.
“They definitely talked about it…to check that everyone was on the same page,” said a senior EU official close to the talks, indicating that the issue was raised with all ministers present.
The official added that no-one had spoken out in favor of a Greek exit and said there had been no talk about contingency plans.
“You don΄t want to start making plans for something you really don΄t want to happen, otherwise within an hour, it starts to happen,” the official said.
Speaking after the meeting, Dutch Finance Minister Jan Kees De Jager was pointedly tight-lipped. “I am not going to comment on what was and wasn΄t said. I leave it to Juncker to say what was discussed,” he told journalists.
Speculation that Greece may abandon the euro zone has gained strength in the last eight days, after general elections failed to produce a majority willing to accept the terms of its bailout. Greece΄s creditors in the Eurogroup again refused to any softening of its terms Monday, with Juncker conceding a minimal amount of room for maneuver in the realm of tax policy.
The euro fell to its lowest level against the dollar since January on Monday, while bond prices in the rest of the euro zone΄s periphery have come under a fresh wave of selling pressure, along with equity markets across the region.
Juncker dismissed talk of a Greek exit as “nonsense, propaganda”–despite the fact that a number of ministers and top European Central Bank officials have now spoken openly about the possible consequences. He said Greece needs to find a stable parliamentary majority that will back the country΄s bailout program “swiftly,” but warned his colleagues against “lecturing” Greece on its duties.
“I don΄t like the way of threatening Greece day after day; this isn΄t the way of dealing with partners, colleagues, friends and citizens,” Juncker said.
Lecturing had been the order of the day as the ministers arrived, with Austria΄s Maria Fekter declaring that “Greeks must be clear that the situation is serious and that political pettifogging is out of place here.”
Appearing with Juncker later, European Economic and Monetary Affairs Commissioner Olli Rehn said that Greece was the only one of three countries currently in aid programs that have failed to make economic progress. He said the reasons for its failure have been largely homegrown, citing “a lack of political and weak administrative capacity.”
Rehn was more upbeat about Spain, which he praised for its actions to shore up its banking system, and about the process of budget deficit reduction in some of the euro zone΄s less publicized problem countries, Slovenia and Cyprus.
Juncker said that the interim Greek government will decide Tuesday at around 7am GMT whether it will redeem around EUR450 million in bonds still held by private investors who refused the country΄s debt-swap offer earlier in the year.
Although the meeting had discussed a wide range of topics, it was prevented in part from taking any political decisions by the fact that the incoming French President Francois Hollande has not taken office yet nor named a finance minister. France was instead represented by a senior treasury official.
As such, there was no formal decision on a number of appointments to key positions in the euro zone΄s apparatus. Those include a position on the European Central Bank΄s executive board, the chair of the European Stability Mechanism–which will be the euro zone΄s permanent bailout vehicle–and the chair of the Eurogroup itself. Juncker is to step down from the latter position in July.
EU finance ministers will return for further discussions Tuesday, including a fresh effort to reach a deal on how to transpose the Basel III capital requirement rules into EU law.
(source: Dow Jones)