Greek Post-War Paintings to be Sold at Bonhams Auction House 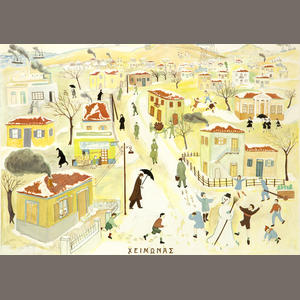 This may not be the first time that Bonhams auction house sells Greek painters’ works, but it is great news that international auction houses have decided to include Greeks in their auction.

The painting titled “Dioskouros II” by Nikos Engonopoulos and “Eroticon” by the “great Greek master of geometric abstraction, Yannis Moralis” will go under the hammer May 22 at the auction house in the UK.

Art historian N. Loizidi stated on Surrealism in Modern Greek Art: “Engonopoulos gave us one version of surrealism – universal – but at the same time deeply rooted to Greekness.” The work has a pre-sale estimate of £100,000 – 150,000.

Yannis Moralis is, according to Bonhams, widely accepted as the greatest living artist. His work will be sold estimately for £180,000 – 250,000.

Engonopoulos and Moralis are “two of the most important members of the ‘Thirties Generation’ of Greek artists,” say people in charge for the Greek sales department at Bonhams.