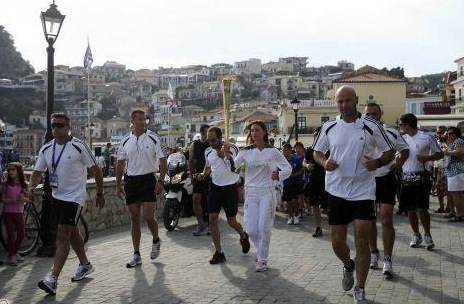 Northern Greece embraced the Olympic Flame Sunday that burns for the 2012 London Games on the fourth day of the Torch Relay that will continue Monday towards the Greek-Turkish borders.
Starting from the city of Ioannina in the western part of the country, where the sacred light made an overnight stop, it then crossed the mountainous regions of Hiperus reaching the town of Kozani, where its diachronic value was stressed once again.
Among the locals who welcomed the Flame was Nitsa Babou, daughter of one of the torchbearers in the first Torch Relay organized in 1936 for the Berlin Olympics.
In the city of Veria, the highlight of the welcoming ceremony was the performance of a students’ choir that sang the Olympic anthem before wishing success to torchbearer Sofia Ifantidou, a local athlete who will participate in the London Games.
A big group of veteran Greek Olympic champions, such as Ioannis Melissanidis and Voula Patoulidou, were among the torchbearers at the Flame’s next stop, the port of Thessaloniki.
“Each time I hold the Olympic Light, I have the same strong feelings. I wish the best to all athletes competing in the Games,” Patoulidou said, as she lit the cauldron in front of the Olympic Museum.
The sacred Flame ignited the same strong feelings in the crowd that welcomed the torchbearers on Sunday evening in the city of Kavala.
On May 17, according to the timetable, the Olympic Flame that was lit last Thursday at Olympia, the birthplace of the Olympics 2,500 years ago, will be in Athens for the handing over ceremony to the British delegation that will transfer it to Britain.
The ceremony will be conducted at Panathinaikon Stadium, where the Olympic Games were “revived” in 1986 to remind humanity of the diachronic ideals of friendship and peace.
(source: Xinhua)