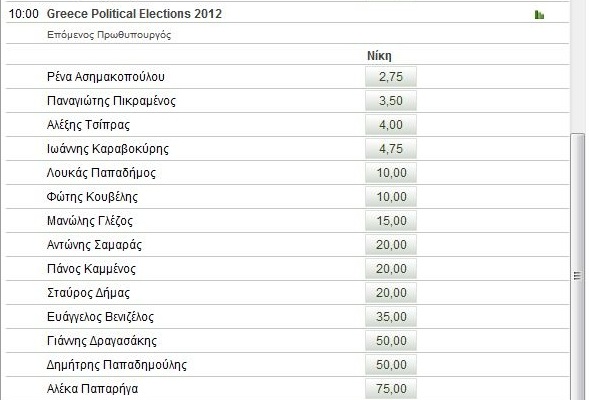 Greek citizens voted last Sunday and now gamblers are betting on who will be the country’s next Prime Minister.
A Swedish bet company claims that the most possible Greek PM is the President of the Supreme Court Rena Asimakopoulou. The Swedish give a 2.75 profit for the Greek woman with reason. If the elected parties don’t manage to form a government, then the President of Greece makes the Supreme Court govern for 30 days and lead the country to repeat elections. Should this happen, Rena Asimakopoulou will be the first female Prime Minister of Greece.
Swedish gamblers give 3.50 profit to people betting for Council of State President Panagiotis Pikramenos for the same reason mentioned above.
Third place is Alexis Tsipras, with a 4.00 profit. Antonis Samaras is less likely to become Greece’s next PM, actually even less than former rebel fighter Manolis Glezos (profit: 15.00), offering a 20.00 profit. Former PM of Greece, Lukas Papademos and Democratic Left leader Fotis Kouvelis have equal possibilities to become the next PM, with a profit of 10.00.
According to the bet company, the most impossible leader of the country is General Secretary of the Greek Communist Party Aleka Papariga, with a profit reaching 75.00.