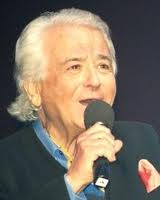 George Dimou, along with other musicians, sang in Raimund Theatre in Vienna on May 7 and the audience was fascinated.

While on the “Syrtaki 2012” tour, Dimou plans to perform in six Austrian cities and present Austrians with some Greek folk songs.

The attendants of the music performance were mostly Austrians who indulged themselves in the music of Hatzinassios, Katsaros, Theodorakis, Hatzidakis and Spanos.

The concert was part of a solidarity campaign for Greece which joined, among others, Greek Orthodox Metropolitan Bishop of Austria and Austrian former Minister of the Interior Karl Blecha.

Dimou addressed the Austrian audience, talking about his beloved two home countries – Greece and Austria. He also reminded them that, despite the financial difficulties, Greece will never lose its natural beauty, its culture and mostly, its hospitality.

Famous Greek musicians accompanied him at the concert. Andrew Boutsikakis’ six-member-orchestra and artists George Gerolimatos, Maria Kanelopoulou, Nona Voudouri and John Leferis traveled from all around Greece to perform  with Dimou.

George Dimou was born in 1931 in Thessaloniki and migrated to Vienna in 1958. He started his music career singing in French, Italian, Spanish and German. From 1960 until today, he performs in Vienna, but also in other Austrian cities as well, and presents musical hits of Greek folk music in both the Greek and German languages.

Successful Greek-Americans from all across the West Coast are being featured in a new YouTube series titled "Learn From the Greeks".
Crime

The investigating magistrate and the prosecutor ruled that former National Theater director and actor Dimitris Lignadis should be further detained until trial.
Greece