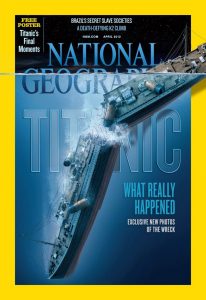 Nick Kaloterakis is a Sydney-based illustrator and has worked for Popular Science magazine during the past few years. He was born in Athens and is of Cretan origin. In Greece, he became interested in photography, drawing and graphic arts. In 1997, he followed his Greek-Australian wife to the land down under, and discovered his talent in visual designs.

Kaloterakis’ career got a major boost when Titanic film director James Cameron found out about his work and asked him to collaborate for a historic photo.

On the occasion of the Titanic 100-year anniversary, Cameron, along with National Geographic magazine, asked Kaloterakis to create 3D designs of the Titanic.

“I was in the right place at the right time,” commented Kaloterakis.

He was also offered a scholarship by a production studio, but he rejected it and worked at a similar studio in Artarmon, called Engine.

“National Geographic liked the detail in my work, so they asked me to [collaborate] when they began the Titanic design with Cameron,” said Kaloterakis.

“I needed five months for the illustration, to represent step-by-step how the Titanic sank. I collaborated with a team of specialists – oceanographers, artists and scientists – having studied Titanic wrecks for ages,” continued the Greek 3D animator.

Kaloterakis and National Geographic paid significant attention to detail in order for their design to be historically and technically accurate.

Taking into consideration that this was the magazine’s most successful issue of the past 30 years, Nick Kaloterakis’ hard work was definitely worth it.