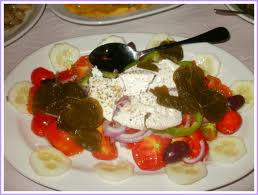 Athos Holy Mountain’s cuisine has already fascinated Greeks, who buy the monks’ cook books. But now, Romania will also have the opportunity to taste some recipes coming from the Greek Mountain dedicated to Virgin Mary.

Monk Epifanios Mylopotaminos will be tonight’s master chef in one of Bucharest’s most famous hotels. He will present the “Monks’ Cuisine,” by cooking traditional dishes originally made in the monasteries of Mount Athos.

The monk will use only local products produced by the monks, as well some of the monks’ most qualified and tasty wines for his meal.

The cooking event is part of the “Mount Athos Gourmet” program, organized by the Organization for the Tourism Development of the region around Mt. Athos.

The program includes visits to five more Romanian cities to promote the “Cuisine of the Holy Mountain Athos” book, which has already been translated in English, German, Russian and is about to be released in Romanian.