GRNews
GreekReporter.comGreeceYoung Farmers Union of Imathia: 'Greeks Are Not Willing to Work in...

Young Farmers Union of Imathia: 'Greeks Are Not Willing to Work in Agriculture' 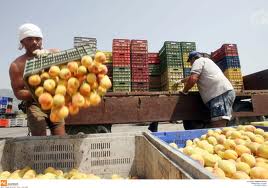 The Union of Young Farmers of Imathia prefecture called on workers to harvest peaches in the region, but only 19 Greeks responded, just as Greek officials announced that unemployment hit 22%.
Unemployment rates in central Macedonia, where the Imathia prefecture is located, are even higher at 25%. In the neighboring prefecture of Pella, the unemployment reached 50%.
4,885 applicants for the Union’s job positions are of Albanian origin. The applications were cheap and easy to submit, since all they had to do was send a text message to apply for the harvest position.
The workers will have to work six days a week for four months on the plains of Imathia and Pella. Their day wage will be 23 Euros.
“This year, we expected to have thousands of Greek applicants. We talk about the crisis and unemployment everyday. We know it is hard work, but when you are unemployed you have to work for even little money too,” stated President of the Union of Young Farmers of Imathia prefecture Nikos Angelopoulos.
“During the first week, only eight people were interested in the openings and now there are 19. As it seems, Greeks do not want to get involved with agriculture and become farmers,” he comments.
Among the number of Greek applicants, there is a retired doctor, an unemployed engineer and even women over 60.
“We will cover the harvest needs with Albanians, Bulgarians and people from FYROM,” concluded Angelopoulos.