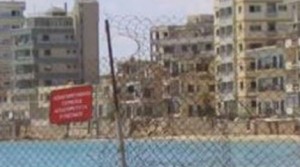 Turkish Cypriot authorities are preparing a unilateral “Plan B” for northern Cyprus should long-running talks on reunifying the divided Mediterranean island founder, according to a senior envoy for the breakaway state.
According to Reuters, Kudret Ozersay did not elaborate what form the action might take; but Turkish media have suggested northern Cyprus might allow Greek Cypriots to reclaim property in Varosha, a seafront town seized by Turkish troops in a 1974 invasion triggered by a Greek-backed coup intended to unite the island with Greece.
Varosha, with its decaying high-rise hotels, now stands abandoned and fenced off, patrolled by Turkish troops monitoring the demarcation line with Greek Cyprus. Reclamation of buildings by Greek Cypriots who fled the fighting, or their descendants, could mark a breakthrough in relations between the two sides.
Varosha, in the north-east of the island, has generally been regarded as a potential diplomatic bargaining counter for Turkey in contact with Greek Cypriots over the future of the island.
“(While) comprehensive settlement talks continue, I do not believe something can be done about Varosha,” Ozersay said, in a response leaving open the possibility of change in the town΄s status should the talks collapse.
He said Turkish Cypriots remained willing to participate in a wide-ranging settlement with the island΄s larger Greek community in the south but were ready to act alone if no way forward could be found.
Efforts to reunite the island have repeatedly failed, with the latest negotiations, launched in 2008, hitting an impasse over fraught issues such as the return of property to internally displaced islanders.
Ozersay, a special representative for Turkish Cypriot leader Dervis Eroglu, said northern Cyprus would act in line with international law.
“Whatever we are going to do we will aim at creating confidence between the two communities, even if the Greek Cypriot leadership is not willing,” he said in an interview in London.
“We are not going to do something which will make (the relationship) worse,” he added.
Such comments appear to rule out Turkish annexation of Northern Cyprus, formed on the northern third of the island occupied by Turkish forces in 1974.
Turkish governments have in the past, at times of tension with Greece or Greek Cypriots, held out the possibility Ankara could annexe northern Cyprus, scotching all hope of reuniting the island.
Turkey is the only nation that recognizes the self-declared Turkish Republic of Northern Cyprus.
(source: Reuters)