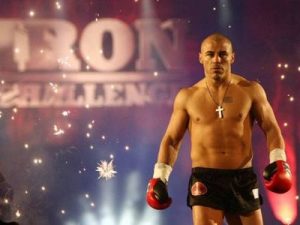 Iron Mike Zambidis returned to the ring today in Greece and took on the international well-known Syrian-Austrian champion, Fadi Merza. The fight was for Zambidis’ “King of the Ring” Oriental Rules Super Welterweight Title, which Zambidis won last year against Ali Gunyar.
While the fight was somewhat of a tune up for Zambidis, it wasn’t easy for him as Merza looked to have a noticeable size and height advantage. Step up knees were coming his way throughout the course of the fight and Merza wouldn’t just hand over the win to him. It was a fun fight, as most Zambidis fights are, and he walked away with a unanimous decision.
Fadi Merza is rated among the top 10 of athletes worldwide in his category and challenged Iron Mike, claiming the World Title of King of the Ring in 71kg.
Up next for Zambidis is a rematch with Chahid Oulad El Hadj at the K-1 MAX Final 16 in Madrid, Spain on May 27. Their fight at the Final 16 in 2010 was absolutely insane and despite it being hard pressed to live up to that, it should still be a great fight.
The organization Iron Challenge is part of the World Series Championships, which take place around the world and the holders of the Super World Title will fight in March 2013 for the Super World Champion title.

EU leaders have agreed to discuss the possible issuance of vaccine certificates to help restart travel when they meet on Thursday.
Diaspora