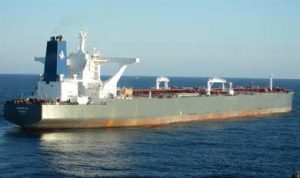 ATHENS – Greece’s shipping industry, which pays no income taxes to its homeland, may find it difficult to get more financing from Greek banks because of the economic crisis that has created a deep recession and has threatened to push Greece out of the Eurozone, a research report has indicated. The problem could be especially troublesome for shipowners who want to finance higher-return businesses as the banks await recapitalization from the government which imposed losses of 74 percent on investors as part of a debt-write down deal to save the country $134 billion in debt.
The so-called Private Sector Involvement (PSI), which was implemented by former Finance Minister Evangelos Venizelos, now the PASOK Socialist party’s leader and its candidate for Prime Minister in the May 6 elections, was required by the Troika of the European Union-International Monetary Fund-European Central Bank (EU-IMF-ECB), if Greece wanted a second bailout of $173 billion, to go along with a first series of $152 billion in rescue loans to prop up the country’s dead economy.
The PSI cut deep into the capital of Greek banks, leaving them with little resources for lending, and the Petrofin Research report said that could leave Greek shipowners unable to obtain money from banks in their own country. Greece’s sovereign debt crisis, recession, the high cost of liquidity, the PSI losses and the capital inadequacy of Greek lenders saw the value of loan portfolios to Greek shipowners fall 8.6 percent in 2011 to $15.9 billion, the Athens-based shipping research company said in a report published on its website.
“Once recapitalized, Greek banks will seek to apply their new liquidity to those sectors offering the highest rewards whilst maintaining sufficient liquidity for the future,” Petrofin said. “Consequently, the outlook for Greek banks toward ship finance remains hazy.” The value of committed but undrawn loans from Greek banks to shipowners fell nearly 59 percent in 2011 to just under $892.5 million, the report said.
Most lenders are allowing such loans to lapse without replacement, according to the report, affecting “the ability of existing new shipbuilding orders being financed, as well as the possibility of placing new orders.” Such loans fell by around 71 percent for both National Bank and Alpha Bank, respectively Greece’s first and third-largest lenders, and by about 61 percent for Eurobank and Piraeus Bank, the second and fourth-largest, according to the report.
Greek banks are awaiting nearly $65 billion from the second bailout but the monies have been delayed further complicating the difficulties for the banks, which are instead pressing Greek clients to pay back all their loans despite suffering big pay cuts, tax hikes, slashed pensions and 21.8 percent unemployment required for the Troika loans. Foreign banks account for about 75 percent of lending to the Greek shipping industry. Total loans related to Greek ship finance booked last year fell by nearly 9 percent to $67.02 billion from $73.23 billion in 2008.
The Greek merchant marine industry is the largest in the world and is responsible for over 16 percent of the Greek economy. Only the Greek tourism industry is responsible for a larger piece of the Greek economic pie. Greece’s fleet accounts for about 8 percent of the world’s fleet in terms of vessels. The total number of ships it operates stands above 3,000. Greek ship owners are key players in the dry bulk shipping sector, which ferries strategic commodities including coal and iron ore, as well being active in the oil tanker market.
Despite the crisis, Greek shippers have taken delivery of 230 new vessels since the start of 2009. About 367 vessels are on order in 2010 and 249 will be on order next year. The number of Greek companies operating ships stands at 1,142. The Greek controlled fleet is registered under 47 flags. About 969 ships are Greek-flagged. Other big flags in the Greek fleet are Liberia and Panama, under which 581 and 558 vessels are registered respectively. Greek shipping companies have to pay a tonnage tax but are exempt from income taxes on profits from operating Greek registered vessels. Analysts expect Greece to maintain the favorable tax regime further cushioning the sector, adding that if direct taxation was introduced, companies would relocate to other countries. While shipping accounts for just over 1 percent of Greece’s 5 million workforce, its economic influence is far higher. Foreign earnings from shipping were about $17.8 billion last year, according to the central bank.
The merchant marine brought Greece foreign exchange inflows of no less than $186 billion in the 2000-2010 decade, according to an annual report released by the European Community Shipowners’ Association (ECSA), showing that foreign exchange inflows from shipping and exports were the only ones to have shown an increase in Greece’s current account balance.
ECSA added that Greek shipping accounts for 41.49 percent of European shipping, with the Greek register featuring 2,096 ships exceeding 1,000 deadweight tons, for a total capacity of 43 million dwt. The Greek-managed fleet includes 3,185 vessels over 1,000 dwt, amounting to a 14.33 percent share of the global fleet. Greeks own 22.54 percent of the global tanker fleet and 16.8 percent of the global dry-bulk carrier fleet, not including ships on order. Petrofin Research data shows that the number of Greek shipping companies owning more than 25 vessels increased from 31 in 2010 to 34 this year, while firms owning between 16 and 24 ships also increased from 33 to 37 within a year.
(Sources: Kathimerini, Bloomberg, Reuters)