Crisis, Taxes and Poor Clergymen. Or Maybe Not? 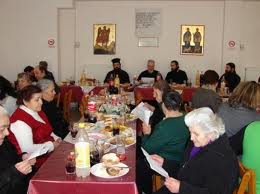 In Greece during 2012, austerity measures, political and financial scandals, wage cuts and Greeks committing suicide are on the front-pages.
While Greek politicians give interviews to journalists about the crisis and with the country’s May 6 upcoming elections, some citizens raise their voice and call on the Greek government to tax, not only the middle-class workers, but mostly the Greek Orthodox Church.
Some of them claim these taxes would be fair enough because it is a common secret that Greek clergymen are rich. Taking into account the Abbot Ephraim scandal and his charges over land swap with the Greek state, this demand doesn’t look so unjustified.
But there are many reverends who disagree. They don’t have offshore companies or mansions, they are just civil servants who pay taxes, that’s why they feel wronged.
The state agreed to pay priests’ salaries in exchange for large amounts of church property, including land. But this means more than 10,000 priests are now on the government payroll, putting a 190 million euro ($250 million) annual burden on the country’s overstretched budget, says Athens News.
In February, the church stopped broadcasting its radio program after 23 years. “Needs are increasing while resources are falling,” said Father Vassileios Hatzavas. While the IMF and the EU impose more measures and the unemployment rates rise, the church needs more supplies for the daily soup kitchen.
Clergymen also state that the church is a non-profit organization and as such, it pays the corresponding taxes.