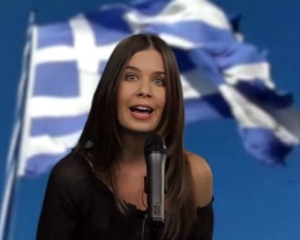 Social networks and local media in Greece were on fire today after the release of a short video featuring Greek actress Katerina Moutsatsou, answering the critics of Greece and its people in her own way.

Entitled “I am Hellene,” Moutsatsou, who has been living and working in LA since 2008, explains to foreigners that the right name to call the people of her country is “Hellenes” and not “Greeks” (Graecus), while she also tried to distinguish the Greeks from the common stereotypes cultivated abroad since the economic crisis broke out.

Outraged by the negative manner in which the international media have been picturing Greece lately, the Greek actress uploaded her video feature on YouTube and has stirred up controversy among the Greeks, with some praising her initiative of presenting Greece, its history and society, and others protesting against the copied Canadian concept and the emotionally charged manifesto of an actress “doing politics.”

The original idea of the video belongs to an advertisement of Molson Canadian Beer, aired in Canada and the USA some six years ago. The idea was also used in a popular ad campaign centered on Canadian nationalism.

This urged some blog users to condemn Moutsatsou’s video as “not original,” and underestimating the public’s intelligence by mereley showing off ancient Greek history and the natural beauty of the country with the sound of the national anthem. Other network users commented positively on the video promoting Greece, but were rather skeptical over the actress’ motives.

Other bloggers responded more positively to the video and described it as a personal effort of protesting against the unjust and discriminating behavior against Greece and its people lately, while others saw it as an effort of a Greek person living abroad trying to boost the morale of the Greeks around the world.

Born to a Greek naval officer, Moutsatsou was born in the US but grew up mostly in Greece. Besides her acting career, Moutsatsou is also a professional dancer, with a brief career as a singer. Since 1998, she has been splitting her life between Athens and Istanbul. She is well-known in the Turkish public after having played parts in several Turkish TV series. After moving to LA to pursue acting there, she had a bit part in the smash-hit “The Hangover,” and now co-stars in a new pilot Greek TV series currently in production, “Paramithiasmenes.”