Reception Center to Open For Immigrants 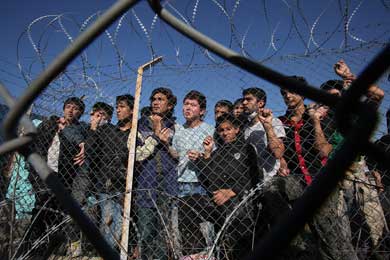 The first Greek reception center for illegal immigrants will open in the next few days in the area of Amigdalesa in the outskirts of Athens.
The Greek minister for citizens’ protection Michalis Chrisochoidis gave the news at the end of a meeting with the Finnish interior minister Paivi Rasanen and Ilkka Laitinen, Executive Director of Frontex, the European agency for border control. A memorandum between Greece and Frontex was signed during the meeting, which signals the cooperation between both parts and the support from the EU with regards to border control in Greece.
“The first reception center,” said Chrisochoidis, “will be able to host about 1,000 people. Their transfer will be initiated at the start of next week.”
The center in Amigdalesa is situated nearby the Greek police officers’ school. “We want to prove there’s no risk involved for anyone and that we all have to support this effort in order to solve the problems which arise from immigration,” the minister concluded.
(source: ANSA)