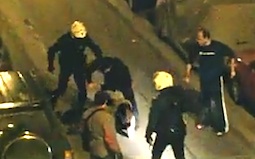 As seen in the video, unidentified policemen stopped an immigrant in the middle of the road, he raised his hands up high, and they attacked him, throwing him on the ground and beating him. The man is said to be Algerian.
Men in civil clothing also took part in the hideous incident. One of them is wearing a black uniform with white stripes. He may be a civilian participating in the beating under the police’s allowance, or he could be an off-duty police officer. He remains unidentified.
In the video, the police vehicle registration plates are ease to identify. An administrative investigation that the Headquarters will probably order is likely to identify the policemen.
The exact time of the incident, the circumstances, and the reason behind it remain yet to be found. The immigrant likely broke the law triggering the policemen’s reaction, but whatever his crime was, police are not supposed to be acting so brutally to a person resisting arrest.
Even when police escorted him to the patrol car, an officer grabbed his neck, while one of his colleagues was kicking him from behind.
Authorities have been informed of the video that has been widely circulated on the internet, and the cruel incident will be investigated as soon as possible.
[youtube]RG4Cf1T8bR4#![/youtube]