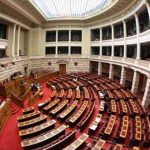 ATHENS – For nearly two years, Greeks have rallyed against pay cuts, tax hikes and slashed pensions imposed by the government as a condition of getting bailouts from international lenders, protesting and rioting and striking and vowing to throw out the parties they blamed for the economic crisis, the PASOK Socialists and New Democracy Conservatives, otherwise bitter ideological rivals who are nonetheless sharing in a shaky hybrid coalition. Now Greeks are ready to re-elect them again, reverting to traditional form and bring back the same parties they hold at fault for ruining their lives.
With little more than two weeks to go before May 6 elections to elect a new leader for Greece, New Democracy and PASOK have rebounded in polls that had shown them slipping precariously and support going to other parties, including splinter groups formed to oppose the austerity measures that came with two bailouts of $325 billion from the Troika of the European Union-International Monetary Fund-European Central Bank (EU-IMF-ECB).  Surveys show the two parties now easily have enough support to get 155 seats in the 300-member Parliament, which would let them form another coalition government and fend off opponents and critics and keep imposing more harsh measures on Greeks, beginning the process of firing 150,000 state workers over the next three years.
There is still some worry in the major parties’ camps, however. Citizens’ Protection Minister Michalis Chrysochoidis, a Socialist, said that the Greek left was to blame for the rise of far-right parties ahead of elections, although not his leftist party. In a series of messages posted on his Twitter account, Chrysochoidis lashed out at the left and at the leader of the Coalition of the Radical Left (SYRIZA), Alexis Tsipras, in particular.
“The positions of Mr. Tsipras lead to absolute inertia and, subsequently, to the Fascistization of society,” the minister said without elaborating.
In another message, Chrysochoidis blamed the views of Tsipras for “leading society in the hands of Chrysi Avgi,” referring to the extreme right group which is polling far above the 3 percent threshold needed to enter Parliament. Many analysts, however, said the anger against austerity has created the rise of extremist parties.
SYRIZA has a very liberal stance on undocumented immigrants in Greece, who have been targeted in attacks as intolerance rises, while Tsipras has been accused of encouraging civil disobedience movements by several ministers. Chrysochoidis indicated that he did not believe SYRIZA was exclusively to blame. “The left must assume its responsibilities for the rise of the far-right in our country,” he wrote, excluding his own party.
The minister’s comments came shortly after Tsipras described Chrysochoidis as a “political conman” and condemned him for switching his focus to immigration in the countdown to general elections in a bid to distract from his earlier admission of not having read the text of Greece’s debt deal with foreign creditors.
(Source: Kathimerini)