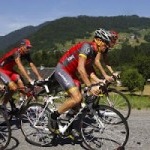 From May 16-20, the 18th International Cycling Tour of Greece will take place in Peloponnese. This event has a huge history and is of great national importance. People in charge of it, as well as cyclists, hope to make this the center of Greece’s athletic events.
About 100 cyclists from several different countries will compete for the prize, passing through paths of various natural beauty. The cycling tour is scheduled to bring many tourists to visit the country.
In this year’s competition, 16 cycling teams will take part – 13 of them consist of professionals from 11 differenent countries. Another two are the Greek professional teams Gios-Deyser LEON KASTRO and SP TABLEWARE, and the national cycling team will also compete.
96 athletes will attend the 2012 event, which is included in the UCI’s national calendar (Union Cyclist International).
Some of the scenic places that bikers will have the chance to enjoy are Sparta, ancient Olympia, Kalavrita and Mycenae. The race begins on May 16. The starting line will be in ancient Corinth and five days later, will arrive in Athens at Kotzia Square.