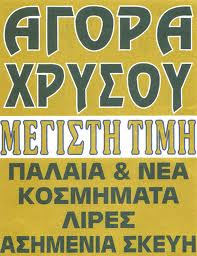 Pawnshops and gold trading stores have flooded Athens and smaller Greek cities, and it was about time for the financial police to check their legitimacy. The statistics about Attica’s stores reports almost one out of four operates legally. To break down numbers, about 1,200 pawnshops and gold trading outlets have a license. On the contrary, about 1,3oo operate illegally, that is almost the same amount as the legal ones.
The Greek Financial and Economic Crime Unit (SDOE) is suspicious of some owners not paying taxes, and even illegally transporting golden items abroad.
Over the past few weeks, police have checked businesses in the areas of Galatsi, Halandri, Glyfada, Pallini and Aegaleo. A man was arrested due to tax evasion yesterday, and the financial police continue searching for smugglers and illegal outlets.
Some gold dealers sell jewels or melted original material without issuing receipts, or even providing the buyer with purchase documents.
Finance Minister Filippos Sachinidis described the alarming situation to MPs earlier this month in order to justify the ongoing financial checks. He also claimed that these stores came as a result of the economic recession.